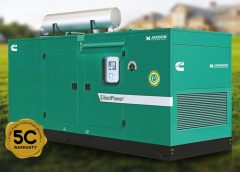 In India, there is no single person who isn’t familiar with power cuts. Forget the rural areas, even the big metropolitan cities experience power cuts. Although some power cuts are planned, still most of them remain unplanned. For instance, an abrupt grid failure, natural disaster or an unprecedented high power demand would mean several hours of blackout.

In such cases, most industries have to face a huge economic loss in the absence of a power backup system.

When it comes to power backup systems, diesel generators still remain the most reliable solution. Thus, in this blog, we will tell you those reasons.

Start-up time: A good diesel generator can have a start-up time less than even five to ten seconds and provide superior performance even during continuous fluctuations in power supply. In fact, some diesel generators are so powerful and advance that you won’t even realize if there was a power cut.

Fuel efficiency: There is a common misconception that diesel generators are not fuel-efficient which makes some people hesitant to install them. This isn’t true. The fact is that a diesel generator can give more energy per unit than any other power backup systems like gas engine generators and UPS.

Eco-efficiency: Gone are those days when diesel generators were a piece of machines who would emit choking smoke and make deafening noise which would literally make difficult for anyone to stand in its vicinity. Today, the diesel generators are so advance that you won’t even realize that they are running. They act as a complete silent power backup systems.

Durability:  The diesel generators are built to resist extreme pressure. A good quality diesel generator, if done timely service, can last up to 20- 25 years without any hassle. They hardly need service once a year by an expert. But if the sound vibration and smoke of your generator are normal, it won’t even need that.

Availability: With the high demand for the power backup systems by different industries, diesel generators are widely available in the market. They are easily installed and can also be taken on loan.

Safety: The biggest concern when installing any machinery is with its safety. Due to over-heating or spark, they can catch fire. Diesel generators are less prone to ignition than the petrol and gasoline generators, which makes them a safe source of power backup. Some are so advance that they have an internal cooling mechanism, which prevents overheating of its internal machinery.

HOW TO LEARN PYTHON CODING?