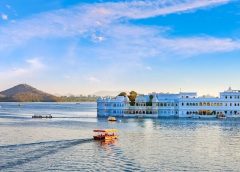 Udaipur is one of the most beautiful and romantic cities in India. Also known as the Venice of India or the city of 100 lakes, it is a unique and unforgettable tourist destination that will leave you enchanted. Join us on this wonderful journey and discover with us one of the most incredible cities in the world, are we leaving?

Udaipur is a beautiful city that is located in the northeast of India, at the foot of the Aravalli Mountains. Although it is not a well-known tourist destination, it has been consolidated in recent years as one of the most romantic cities in the world. And the main reason the city is surrounded by lakes, which reminds the beautiful Venice.

This incredible city was founded in the Maharaja Udai Singh II . Another interesting fact is that it was the ancient kingdom of Mewar. It is a city privileged by nature, to which is added a long history that is reflected in its spectacular architecture.

To get to Udaipur, it is best to take a train from Jaipur or from New Delhi. Another excellent option is to take a luxury train Deecan Odyssey from Delhi and experience. In fact, this service offers many more options and is faster and more comfort and luxury than other trains.

If you have visited other cities in India, it’s sure that your busy life has caught your attention. Well, Udaipur is the opposite; in fact, tranquility is absolute and is another reason why this city is so special.

What to see in Udaipur?

Udaipur has many attractions, but there are some that you should not miss. These are the most important:

It is a large architectural complex that is composed of 4 palaces, of which the largest is that of Rajasthan. It began to be built in 1553 and nothing has to envy the great palaces of the European royal houses.

With an extremely extravagant style, the complex has only two entrances. The most used is the northern entrance, where you can see eight gold arches. These arches are commemorative of when the Maharajas distributed their equivalent weight in silver and gold among the population. It is an impressive architectural work and one of the essential places you must visit when traveling to Udaipur.

On the outskirts of the royal palace we find the spectacular Jagdish temple. The history of this temple dates back to the year 1651. From the moment that Jagdish opened its doors to the public it became one of the most important centers of worship in the city.

Raised on a terrace, it highlights the figures carved into walls and columns and representing different animals and gods.

Raised on the island Jag Niwas more than 250 years ago, we found this spectacular and original palace. It was built as the summer residence of Prince Jagat Singh II. At present, this palace functions as a luxurious hotel. If you have the economic capacity to stay in it, we can guarantee that you will be eager to return.

The cenotaph of Ahar is another essential place to meet in this incredible and historic city. It is a group of royal funerary monuments of extraordinary beauty that were erected approximately two kilometers east of Udaipur, in the town of Ahar.

Here you will find at least 250 tombs or funerary monuments that were built more than 350 years ago. There are also 19 chhatris commemorating the 19 maharajas whose bodies were incinerated in the place. These chhatris are a structure in the shape of a pavilion that rise and have a beautiful and elaborate dome on top.

As you can see, Udaipur is one of the most fascinating cities in India. It’s beautiful lakes give it a very romantic and special touch, as well as its spectacular architecture. If you want to make an unforgettable trip, you should definitely know Udaipur, the Indian Venice, do you dare?