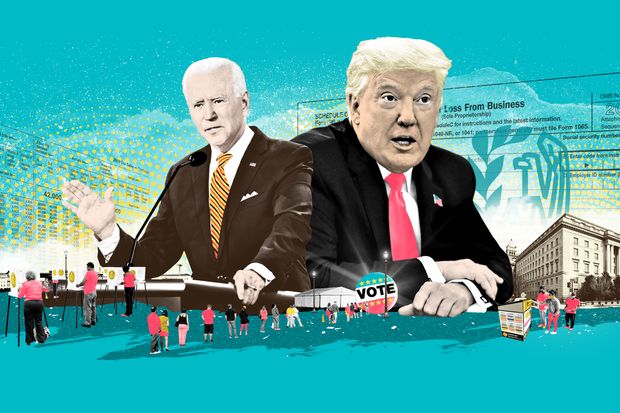 The two American candidates’ economic agenda in the last U.S. election was quite intriguing and brings to the curios mind a thought-provoking question: what were they thinking? Is there no other thing to pick up as an agenda? What about the welfare of the people? How about more stimulus checks or relief bills? Unfortunately, the two candidates refused to focus on any of these. One thing that was of utmost interest to them was “tax.” Indeed, they both knew the importance of tax to the nation’s economy, a weightier matter before an average American. As such, reducing the tax plan means relieving them of their heavy load. Here we are going to discuss below the Biden vs Trump Tax plan.

Donald Trump, the former President of the United States of America, when he was to come into power in 2017, affected certain changes in the U.S. tax code. He reduced the tax brackets, which was one of the significant victories Trump recorded in his regime. Usually, tax cuts reduce the amount of money the taxpayers pay to the government, and the cut can be on income, profits, sales, or assets. However, Trump’s tax plan was effective on three categories of the tax code, and they are:

Income tax is expected to be paid by every citizen who earns wages. When this is on the high side, it affects the people’s take-home, but it increases the consumer’s spending when it is on the low side. Before Trump emerged as the President in 2017 and following the Tax Cuts and Job Acts (TCJA), the tax brackets were simplified from eight to seven, reducing the top rate to 37%. If allowed his second term, Trump had the plan to reduce the tax bracket to just four, which will favor the high-income earners. Biden, on the hand, feels the tax brackets should be restored to what it was before Trump came in 2017, that is, from 37% to 39.6%.

Biden’s agenda on the standard deduction tends to focus more on the wealthy class. He planned to cap the benefit of an itemized deduction to 28% of the value, thereby limiting the wealthy people and families’ ability to cut their tax liability.

This is expected from corporations, and when it is reduced, it lowers the income taxes meant to be paid by corporate bodies. Trump lowered the tax rate expected to be paid by corporate bodies from 35% to 21%, which Biden had no plan to address. Trump’s action was to help corporations get more money to invest in their business. This will, in turn, create more employment opportunities and, in turn, boost the nation’s economy. Biden, in his case, desired that the corporate income tax rate be increased, although not as much as what it was before 2017; he wants it raised from 21% to 28%.

As much as Biden’s tax plan may not be favorable to the citizens, it has its benefits. For instance, his call for an increase in the corporate tax rate ensures that irrespective of any tax breaks, every corporate body pays a minimum of 15% tax on their income. This can mean he wants to avoid favoritism and embrace equality treating everyone with all fairness.

Since tax cuts mean reducing the burden on citizens, this automatically means the nation’s debt might increase. By implication, it can be said that Trump’s tax plan may not be favorable to the nation’s economy as the government may begin to lose its major means of revenue. On the other hand, Biden’s plan would have been better since it will be a way of boosting the nation’s economy. Unfortunately, he seems to be more interested in restoring the highest tax bracket rate to 39.6% as it was before 2017. However, this could have been more effective if he considered reducing the tax brackets, considering that the world is just recovering from the aftermaths of the COVID-19 pandemic and tax cuts are primarily effective when they occur during a recession.

How To Care For Your Sewage Pump Stations

Everything You Need To Know About A Catering License

Do You Have A Good Corporate Caterer?

Important Things To Consider When Choosing A Corporate Caterer

Monitor Energy To Bring Down Your Energy Bills

Top Reasons You Should Provide Catering Services To Your Employees