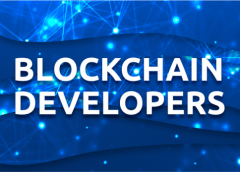 The new technology that is making many heads turn, Blockchain is becoming more & more eminent every day by stretching the reach of its benefits. This decentralized digital ledger is making waves since it is the most reliable & secure technology for recording not just financial transactions but nearly anything that holds value. And, the world of technology has not been this awe-struck since the inception of the internet.

As a matter of fact, Blockchain supposedly has the potential to act as the backbone of a new genre of the internet as it offers a safe way to distribute information without being copied. For those who do not understand the relevance of this technological wonder, Blockchain removes the need a central authority when making any kind of transaction.

Hence, the demand for Blockchain professionals is staggering. Every organization is aspiring to enhance its efficacy by adopting Blockchain and they clearly need manpower to do so. This has been depicted comprehensibly in the latest infographic by Credforce – Blockchain: The New Kid on the Block is the Hulk of the Tech World.

It reveals that the freelancing jobs are expanding 6000% year after year, moreover, 92% of the employers are embracing the trend of aggressive freelancing, as disclosed by Forbes. In addition to this development, the remunerations for Blockchain developers are evidently skyrocketing for a very basic reason that they are the most essential & expensive breed of workers in the tech sphere today.

Referring to the Credforce infographic again, the average salary of a Blockchain develop in the United States is around $ 95,000 annually, as per reported by Paysa. And, that’s not it. A dexterous developer in this realm who shows great potential can earn as much as $ 140,000 per year.

So, what are the top skills that make one an exceptional Blockchain Developer?

The skills deficit in the Blockchain sector is projected to cost $975 Billion & 11.5 Trillion to nations like the United States of America & Germany, according to a study by Accenture. On that account, there could be a better time to establish yourself as a Blockchain Professional.

Thermal Monoculars Help You See At Night, Through Fog And Smoke

How Can Students Benefit From These Interest Subsidies in the Padho Pardesh scheme?