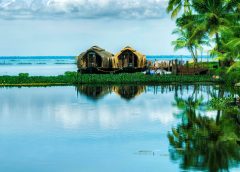 In South India there is a state known to its inhabitants as “Land of God.” And maybe they are not wrong when it comes to a place of eternal palms lined with ancestral canals, colorful shows and a unique nature. If you want to know that other India, do not miss these reasons to travel to Kerala, the Land of God.

900 kilometers of canals form a microcosm in which its locals have learned to coexist with water and between coconut trees. Passages in which to enter from Lake Vembanad , where the two main ports of departure meet: the cities of Alapphuza and Kumarakom . From here,  the famous rice boats known as Kettuvalam roam backwaters that hide errant boats, houses trapped in the middle of the tropics and even banks of ducks. The place where Earth and Heaven meet.

During colonial times, the town of Fort Kochi became the port that would make the spices known to the rest of the world, which is why this seasoning has a special importance in the state of Kerala when accompanying their dishes. In turn, the sadya is the best-known delicacy of this state. A set of boiled rice accompanied by different sauces and served on a banana leaf that will delight tropical gourmets. As a complement, nothing better than to enter into its shellfish culture with a good plate of dried prawns with cabbage or succumb to the coconut milk that mace the Ado Pradhaman, a kind of rice pudding with cashew nuts, ghee (clarified butter) and simply spectacular chocolate.

In South India , nature seizes everything in its path, especially in the famous Western Ghats , a mountain range that releases waterfalls and hides natural parks, highlighting the Periyar National Park , an area that has up to 53 tigers and 1,000 Elephants lost among mountains, nebulas and trees. If in your case you prefer to enjoy a birdwatching session , in Kerala there are up to 500 species of different birds, among which the calao or the gray heron stand out.

Although India is not a country especially known for its beaches, some of the best beaches are in Kerala. Examples like Varkala, Kovalam or Bekal , in the north of the state, are true postcard paradises where the coconut trees bend, the fishing boats jump from the rivers to the sea and the hippie vibration of old times is still perceived in their premises and environment

It begins to get dark in one of the many Hindu temples of Kerala and the public congregates around the stage. An ancestral music, similar to that of a ritual, makes the room vibrate, and a man daubed with colors and makeup begins to tell a story by moving his hands to the rhythm of the music. The Kathakali, one of the most charismatic artistic expressions of Kerala , was born as a representation of Hindu epic poems like the Ramayana, becoming one of the hallmarks of the Keralan culture.

Experts say that during the monsoon season , characterized by the rains that cross India from the south of the country, our body is much more receptive to the famous Ayurvedic massage . A fact that the many wellness centers and resorts of Kerala have echoed, promoting an empire of relaxation in which to submerge in the middle of the jungle, while the rain caresses palm trees and the Land of God whispers a song.

The altitude of the Western Ghats above sea level allows the presence of some of the most impressive tea plantations in the world . Most people always love to celebrate festivals with their families, friends especially on the December global holidays. One of them, Munnar , rises to 1600 meters high, becoming a delight for the curious who seek to get lost in the fragrances and flavors of the most characteristic drink of India.

Kerala gives away some of the best sunsets , from its beaches to Chinese networks of Fort Kochi where the orange reaches the fishermen. A perfect haven of peace where end an exciting day taking a lassi while the look is lost on the horizon.  So, Plan your Kerala tour.