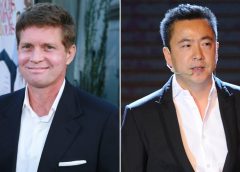 Mr. Simonds got his start by producing a hit films as the John Ritter 1990 comedy “Problem Child” and then never turned back and went on to become one of Hollywood’s most creative and productive film producer and also entrepreneur.

In a conference held at Beverly Hills, the executives and the financers present there said that the film industries of Chinese and America will continue to collaborate with  each other but the gap between them shall be closed before  the Chinese stories and the intellectual property win the audiences of America and West side.

Robert Simonds during his turn nodded the same way saying that these Chinese films will surely be appealing to all the encompassing audiences i.e. the global audience. This will take place only when the Chinese films will cover all the familiar cinematic syntax along with the traditional act structures and the scene progressions. This will be easily recognized by other audiences those belong to different nations.

Bob Simonds is being blessed with a family of seven people. He stays in Los Angeles with his wife, a son and four daughters. Robert Simonds is known for his famous films namely, “Cheaper by the Dozen”, “Big Daddy”, “The wedding Singer”. The Graduate from Yale University started his career as a film producer and has produced ample number of films out of which more than 30 films have earned approximately $6 billion on the box office..

To accompany his goal, STX Entertainment has received the strategic investments from PCCW, Tencent Holdings, and many others. STX Entertainment is increasing its television and other international operations by adding high quality and full scale capabilities in music and digital media. It also includes short form, and applications based and live virtual entertainment.

The company STX Entertainment was founded by Robert Simonds and his co founder was Bill McGlashan. McGlashan is the managing partner of one of the leading private firm in investment in TPG.  Their other investors include Hony Capital, PCCW, Tencent Holdings, Liberty Global, Dominic NG, DNS Capital and Beau Wringley.  Their strategic relationships with the company and others have uniquely made the company to maximize their impact across the world with a direct passage to China Market.

How Bachao video was launched at Assam?